The Andrea Yates Case: The Christian God 0 vs. Christianity Meme 3
By Don Baker
On June 20th, 2001, Houston Texas resident Andrea Yates drowned all five of her children, ages from 7 years to 6 months, in the home bathtub. Most people have been shocked and are in disbelief of a mother whose maternal instincts had been so misdirected. She has pleaded innocence by reason of insanity in her murder trial. (She has since been convicted of murder.) Her much publicized case has drawn a lot of international attention, but little of it has been about the role of God and Christianity in the tragedy.

Andrea was clearly struggling with mental illness--psychotic depression and schizophrenia, in particular. Her first bout with postpartum depression followed the birth of her fourth child, Luke, in 1999. She had several suicide attempts and four psychiatric hospitalizations. A psychiatrist who treated her warned her against having more children. He wrote, "Apparently patient and husband plan to have as many babies as nature will allow! This will surely guarantee future psychotic depression." Her condition stabilized and the couple believed she had been cured. After the birth of their fifth child, Mary, and the death of her father, Andrea fell into another depression and had two more hospitalizations. According to her sister, she became irrational after the death of her father. She had another suicide attempt just weeks before killing her children. Dr. Melissa Ferguson, medical director of psychiatric services in the Harris County jail testified that she was, "one of the sickest patients I have ever seen."

Much of Andreas psychosis had religious imagery. She was obsessed with images of Satan. About the murders, she told her doctor, "It was the seventh deadly sin. My children weren't righteous. They stumbled because I was evil. The way I was raising them they could never be saved... Better for someone else to tie a millstone around their neck and cast them into a river than to stumble. They were going to perish [in Hell]." During her detention, she was concerned about whether the mark of the beast (666) was on her head. She said that, "Governor [George W.] Bush would have to destroy Satan." [Note: Her misquote of the Bible comes from Mark 9:47: "And whosoever shall offend one of these little ones that believe in me, it is better for him that a millstone were hanged about his neck, and he were cast into the sea." It not about killing children, but killing those who offend child believers.]

Andrea and her husband Russell are devout Christians. Andrea was home-schooling her children, no doubt with a strong religious slant. The couple probably believed, as many Christians do, that it was their duty to God to procreate. The couple is likely to have sought religious council and help during their troubled recent years. Without doubt they and others prayed to God for his help with her mental illness.

While the Yates family was deeply steeped in Christianity, the Christian God conspicuously failed to help Andrea, Russell, or their five innocent children. He did not make her well, get her the help she needed, or prevent her from killing the children. The omniscient, omnipotent Christian God turned a blind eye to the cries for help of a devout, Christian family in a desperate situation. Andrea Yates disproves the Christian concept of a benevolent God that answers the prayers of devout Christians. (Any other conclusion amounts to blaming the victims.) So, the Christian God gets a score of zero in the case of Andrea Yates. (Perhaps he was too busy assembling jihadis under the alias of Allah for their September 11, 2001 attack on the World Trade Center and Pentagon.) 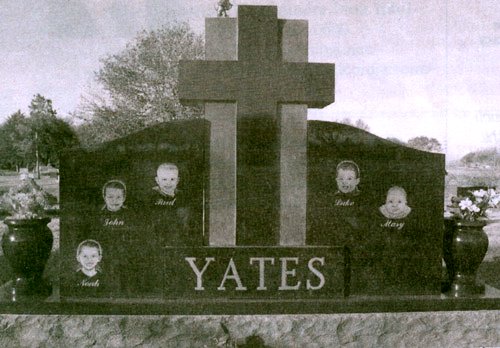